IS THE GERMAN WIREHAIRED POINTER FOR YOU? 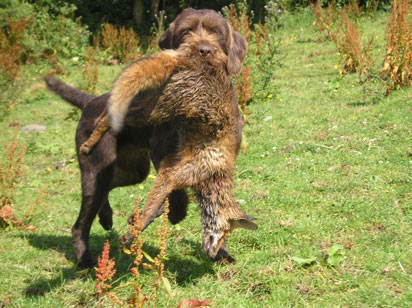 This is a question you should ask yourself more than once before deciding on the German Wirehaired Pointer or Deutsch Drahthaar as your breed of choice!

German Wirehaired Pointers are extremely  powerful, versatile Gundogs with a strong hunting drive, and are not a breed to be taken on without a huge amount of consideration and research. As you can see from the picture above, a GWP is more than capable of dispatching an adult fox. In the UK they are a popular deer stalking dog, and in European countries they are also often used for hunting wild boar. The GWP/DD is an extremely versatile type of working dog, and will work well in whatever discipline you train it for!  It is worth noting however that the GWP is not the easiest of breeds to train or live with, and most people who own a German Wirehaired Pointer have them because they have grown to love them or they are good working dogs. Many an "experienced" trainer has discovered that the GWP was not actually the dog for them, and have sadly had to give them up to their breeder! 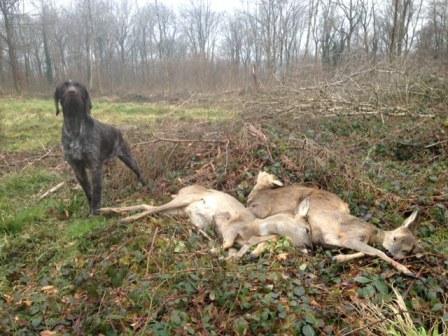 You will get out of the German Wirehaired Pointer what you put in. While they are biddable and loyal, at times they can be stubborn & will push you to your limit and far beyond. You will find yourself on more than one occasion thinking, "why would he/she want to do that" and "why oh why did I let myself get this dog".  German Wirehaired Pointers will do things most dogs would never think of. They steal and eat anything from work tops, even if it is not food; Mobile phones, TV remotes, Your Post! 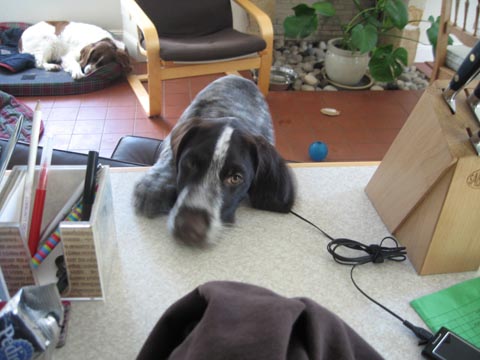 The GWP is a high energy breed, bred for generations to hunt over long distances with drive and desire for prey. They require moderate to high levels of exercise that will challenge their mind and fulfill their natural instincts. If you do not fulfill the GWPs needs, when left to their own devices and/or unsupervised for a period of time they will amuse themselves. This could include chewing and eating anything that takes their fancy (a favourite is socks and underwear) which they will then sick up at the most appropriate times, say when the new neighbours have come over to introduce themselves, or the mother-in-law is on one of her inspection visits. They are also very capable of destroying your home! 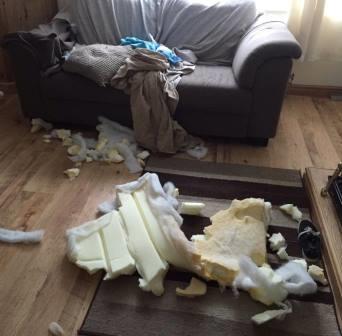 The German Wirehaired Pointer requires calm consistent training, and constant guidance (it is said you will never fully train a GWP). Without firm handling they can become unruly, but they are a sensitive breed and do not respond well to harsh handling! They will steal your food (which is not so funny if you are eating it at the time) and are known for opening cupboards and fridges. Washing machines are also known to have been the target of an inquisitive GWP making their own entertainment. 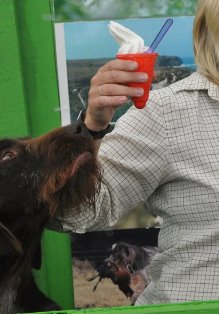 When a GWP picks up scent or discovers something interesting to track, they are capable of going  2 or more fields away. If you have not put the time in to train a RELIABLE recall with distraction, a GWP can easily be lost for an hour or more. This is not only dangerous for the dog, it could also be devastating for local wildlife and/or farm animals! It is not uncommon for the GWP to worry or even kill sheep, and steadiness to livestock is something that must be addressed at a young age. 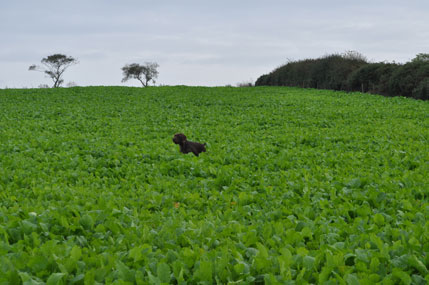 The German Wirehaired Pointer was developed as a hard going working Gundog, and can if allowed have a dominant nature. Adult mature males may not always be tolerant of other dominant males, especially if they have been used as a stud male. Females can be hormonal around their season/heat times, and may not be tolerant of other females at these times. This is not to say that all GWPs are aggressive, but consideration must be given to each individual dog or bitches temperament. GWPs should not display unprovoked aggression towards other (non prey) animals and many GWPs will coexist with other males and females quite happily with little or no altercations. If however another male or female challenges, a GWP is not likely to back down. A GWP may not start an altercation, but they will finish it! On the whole the temperament of the GWP towards people is excellent. Like any dog, aggression and/or dominance of any kind towards people young or old must not be tolerated, and it is up to you to do your homework on breeders to ascertain if the GWPs that they are breeding from have suitable temperaments. There is good and bad in most breeds and the GWP is no exception. 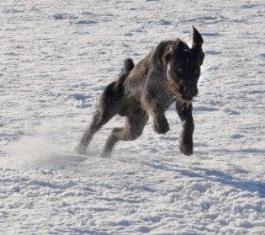 Some of the GWP habits can be less than savoury to say the least! They will eat and roll in poo, any poo they can find (a favourite is fox or badger) which will also cover their beard. GWPs tend to enjoy watching you squirm as they rub whatever is covering their beard, and/or their body on to you.  But their best party trick, the thing that is really endearing is to roll in and play with dead things. Not just any dead things, things that are so dead even the maggots have vacated! When they have rolled in and played with their beloved dead thing long enough, they will then think it great fun to chase around any victim they can find (which may include your children or visitors) with the poor things tail dangling and swing from their mouths! 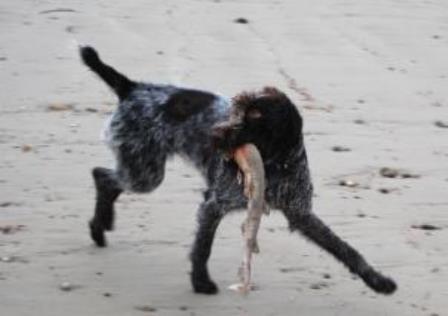 We are often asked if the GWP can live with cats and other small furries? The answer to this is yes, IF they grow up with said furries! The GWP can live happily alongside cats and other domestic small animals as long as they are taught at a young age to respect them, and understand that your furry friend is not their dinner! Other people's small furries however may not be considered by the GWP to be part of their family, and as such will be considered fair game! 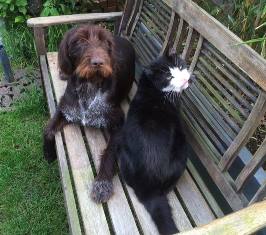 This is just a snapshot of what it can be like to live and work with a German Wirehaired Pointer.  All that is written here is something that you will encounter if you choose the GWP or DD as your breed.

After reading this if you still think the German Wirehaired Pointer may be the dog for you, get as much information on the breed as possible and ask many, many questions. Contact breeders, and if possible other owners. Ask for their honest opinion of the breed, and then think long and hard; 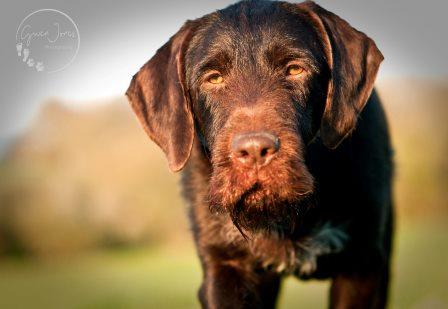 IS THIS REALLY THE BREED FOR YOU?