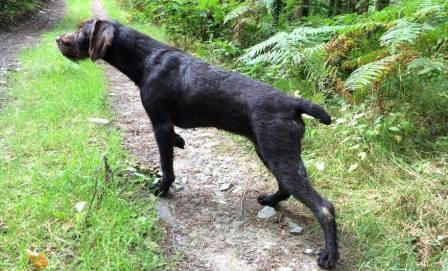 Discussing health issues in any breed can sometimes be controversial and the GWP is no exception.  No breed club or breeder can afford to be complacent when it comes to health issues within their chosen breed or breeds. Health testing is important, however should not be the core reason for including or eliminating an animal from the breeding program.  It would be wise to use a holistic approach and take into consideration the overall suitability of an animal to be bred. Temperament, trainability, construction, correct bite and coat type are also important factors to be considered.

Health testing is an important part of producing a litter; breeders should be aware of any health issues that they would be wise to test for in their own lines. If issues are detected the appropriate action should be taken; if necessary affected animals and close relations removed from the breeding program.

The UK Kennel Club require mandatory DNA testing of GWP for vWD if they are not hereditary clear; it is recommended that an animal is also Hip scored. There are other tests available to breeders and it is up to the breeder to advise potential puppy buyers of their own health testing plans and reasons for doing so.

In comparison to other breeds the GWP is a healthy breed and rarely suffers from major health issues; however there are a few ailments that can sometimes affect the German wirehaired pointer. The instances of these health issues are low, but any potential owner should be aware of them.

Epilepsy and fits.
Epilepsy in the UK bred German wirehaired pointer is thankfully rare, but in recent years, The German wirehaired pointer club have become increasingly aware that more cases are being reported. At the present time, as in humans there are no screening tests available for detecting epilepsy in dogs. As there are no screening tests available at this time, the recommendation is that affected dogs and close relatives should not be bred from. It is advisable for any prospective owner or breeder to  study pedigrees with an experienced breed representative before going ahead with any puppy purchase or breeding program!

vWD is caused by the inheritance of mutated genes                                    these mutated genes are also referred to as the Von Willebrand's Disease genes. An animal with two mutated genes will be affected by the disease. An animal that has inherited i1 mutated gene will be a carrier. Carrier animals often exhibit no symptoms of the disease. If two carrier animals are mated, there is a probability that half of the litter will be carriers, 25% will be affected and 25% will be normal (clear). For animals with the inherited condition there is no cure. Sensible breeding can control this trait. There is now a DNA test available that breeders can have done to show if an animal is affected, a carrier, or clear (free) of this disease, and we are now lucky enough to have a Lab in Manchester LABOKLIN. The test is not expensive and is very easy to have done with your vet, it only takes about a week for the results to come back. We highly recommend that you only purchase dogs or puppies from vWD clear parents.

The Kennel Club (KC) and British Veterinary Association (BVA) developed a scheme some 30 years ago to assess the degree of HD in dogs by X-ray. All x-rays are submitted to the BVA for assessment, and this is done by means of scoring. Each hip has a sum of points. Both hip sums are then added together to produce the final score. The lower and more even the final score the better. It is recommended that breeders take advantage of the BVA hip-scoring schemes available to them, to rule out hereditary defects. Hip Scoring can be done from 12 months of age, but a conclusive hip evaluation cannot be made until an animal is approx 24 months, as this disease can only be diagnosed definitively when the dog is two years old or over. This can now be done under a general anaesthetic or sedation.

Hip dysplasia is thankfully not that common in GWPs, and a lot of owners feel that hip scoring is not necessary. However, this is a working breed and an overall soundness is very important. Research has shown that in breeds where HD used to be a real problem, since the introduction of the hip scoring scheme instances of HD has been greatly reduced. More information on this can be found on the BVA website.

Gastric Torsion (Bloat)
Little is known about why this life threatening condition happens. It seems to affect the larger deep-chested breeds. Some causes are thought to be over feeding, fermentation of food inside the animal, stress, and exercising immediately after food. Some HPRs are known to suffer from a sensitive stomach. This can be largely avoided if they are fed a good quality diet which is not too high in cereal content.

Ear Problems
GWPs tend to suffer with excessive hair growth in the ear canal. The more hair and whiskers on the face the more it is likely that they will have the same hairy inner ears. If the hair is left in the ear canal it can become overheated which may in turn cause an infection. It is very important that from a young age you insist that your puppy lets you inspect his or her ears. When the hair is long enough to grip it with your fingers, you should start to remove it. If you do not start doing this early enough, your wirehair will very much resent the intrusion, and you will most probably have to take trips to your vet, who may have to use a general anaesthetic or some sort of sedation to be able to remove the hair.

Pyometra
In this condition, pus collects in the womb, and can often develop after a bitch's season. It is more often seen in animals of middle and old age, who have not had pups. There are two types, Closed or Open, the latter is easier to recognise, as there is some discharge, which is often evil smelling. The closed form is the more dangerous, in that escape of pus from the uterus is prevented. In both types it is very important that you seek advice from your vet.