Many thanks to Barbara Stamp of the Tynsil kennel UK for entrusting us with this female. 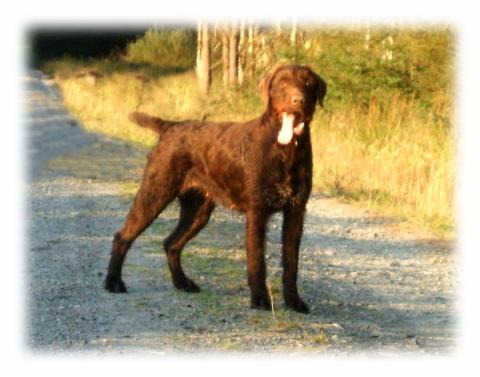 DOB: 22/4/2003
HIPS: 6/6 = 12      (29/04/2008)
vWB: CLEAR  ( BY DNA Laboklin 17/01/2008)
This is the aptly named Taz, a solid liver bitch who came to live with us at seven weeks old. We originally bought her for Les to work on the shoot, but it very soon became clear that taz and our youngest daughter were beginning to develop a very strong bond, which has developed into an almost inseparable friendship. Taz has an excellent coat, along with an extremely tolerant and kind nature. She possess a natural hunting ability, with a strong retrieve from both land and water.  Being our daughters companion she also enjoyed having a go at agility. Taz made her debut on the shoot at the end of our 2004 season. She has spent her life working as a valued member of our dogging in team. She is a hard hunting bitch who sometimes teamed up with Franky to do vermin control.
Now retired from all duties, Taz produced 3 litters for us under the Mustwork affix and is the Dam to our solid liver bitches Roxy and Mira. Taz also produced a litter on breeding terms for Barbara Stamp under the Tynsil affix. She was bred with Ellernhof Olaf vom Mustwork and produced a bitch that Barbara has bred on from to ensure the future line of the Tynsil GWP Kennel.
TAZ
Pedigree for Tynsil Trondela To Mustwork (Taz)